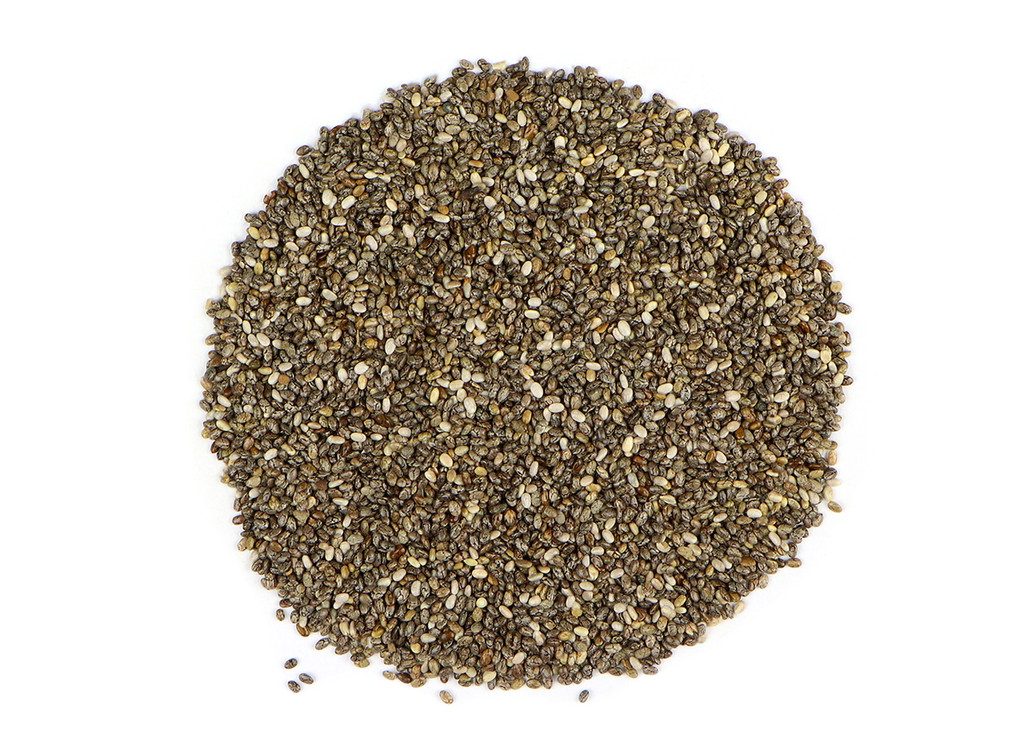 Native to Central America, Salvia hispanica is a member of the extensive mint family and has small, mucilaginous seeds known as chia. Chia seeds have been consumed as a food and in beverages for their nutritive properties since the time of the ancient Aztecs. Still popular today, chia seed is commonly consumed with cereal grains, added to smoothies, or incorporated into fruit juices.

Chia is widely known in Latin America and has been consumed as a nutritive medicinal food and beverage since the time of the ancient Aztecs. It is still popular today in its native habitat of Mexico and Guatemala, and also in Paraguay, Bolivia, and Argentina. More recently, it has become popular in the United States for its antioxidant and fiber content and as a high mucilage superfood that provides Omega 3 fatty acids. It is best eaten with cereal, added to smoothies, or made into fruity beverages. The plant is also referred to as Spanish sage.

Chia is an annual in the mint family (Lamiacea) and is native to the Americas in Guatemala and Mexico. It is similar looking to other species of sage, growing up to 3 feet tall, having purple or white flower clusters ending in a spike at each stem and bearing opposite leaves. The origin of the word 'chia' is thought to come from Nahuatl (language of the Aztecs) word 'chian' meaning oily, as the oil was used for a variety of applications in ancient Mexico. Further, the Mexican state of Chiapas received its name from this meaning 'chia water' or 'chia river.' There are several plants known as chia, a very similar one being Salvia columbariae, which is more commonly known as the golden chia. Others are S. seemannii, S. tiliaefolia, and Hyptis suaveolens, all members of the mint or Lamiacea family sharing some medicinal similarities to S. hispanica.

Cultivation of chia as a commercial crop was initiated in 1991 in an area of Argentina that had struggled with sugar and tobacco crop failures in the prior years and was looking for an alternative crop. Chia is still cultivated in Argentina, in its native habitat in Mexico and Guatemala, and also in Bolivia, Nicaragua, Ecuador, and Australia. However, due to its extreme popularity as a natural health food, it is emerging as a viable commercial crop for other countries also. So far, it has only been cultivated commercially in tropical and subtropical areas, but now, due to "groundbreaking" research conducted at the University of Kentucky, which resulted in new patent-pending chia varieties, it can be grown in temperate regions as well.

In pre-Columbian times, chia was a staple food source and a major crop from 1500-900 B.C.E. In Tenochtitlan, the capital of the Aztec Empire, chia was received as a payment from conquered nations in amounts of 5 to15,000 tons a year. This seed was an offering to the Aztec gods, and its oil (which the Aztecs referred to as 'chiamatl') was used, somewhat indirectly, in ceremonies as it was added to paint which they used to decorate their bodies. Due to its association with religious rituals, the Spanish conquerors prohibited its use and therefore chia cultivation diminished almost entirely for 500 years.

S. columbariae 'golden chia,' native to the southwestern United States and northern Mexico, was used similarly to S. hispanica amongst indigenous tribes of that region. It was believed that 1 teaspoon of this nutritive food could provide enough energy for a full day of trekking through the desert, and it was also administered as an eyewash and to quell diarrhea. Further, the early Spanish settlers believed that a poultice of this seed was highly useful for wounds. Chia was used in the rest of the U.S. in a similar fashion too, and according to The Dispensatory of the United States of America from 1918:

The chia seeds are used not only when crushed as food and for the making of mucilaginous poultices, but also for the preparation of a mucilaginous drink, prepared by adding a teaspoonful of the seed to a tumblerful of cold water, allowing it to stand for half an hour, sweetening and flavoring to taste.

Michael Moore suggests using the leaves of S. columbariae to make, in his words, a very "purple-tasting" tea to alleviate hangovers. Other, more common preparations in the southwestern United States include making chia into a drink mixed with lemon and sugar called 'chia fresca'. Drinking chia seems to be the way to go, in Colombia it was also made into a drink called 'chiapinolli'; and in the Nayarit region of Mexico, made into an 'atole' (which is a thick beverage often made with maize flour) and enjoyed during the 'Mitote' festival celebrated during November or early December.

This seed is a source of Omega 3 fatty acids, a known source of linolenic acid, and has become an increasingly popular source of fatty acids as the concern over fish intake rises due to sustainability issues and potential heavy metal toxicity. Chia contains antioxidants, vitamins, minerals and a soothing source of mucilage that can be drunk or made into a gruel or pudding to soothe the stomach and digestive tract. The seeds dissolve into water, forming a jelly like substance due to its extreme hydrophilic properties (it can absorb 12 times its weight in water). This makes it a perfect substitute for flax seeds in many instances and a great addition to smoothies and baked goods that call for gels or thickeners.

Chia is high in mucilage and soluble fiber; a variety of vitamins, minerals, antioxidants, and is a source of essential fatty acids and isoflavone. According to the USDA, a one ounce serving of chia seeds contains 18% of the recommended daily intake of calcium, 42% of dietary fiber, and also contains phosphorus, magnesium, manganese, copper, iron, molybdenum, niacin, and zinc. The major compounds include essential fatty acids such as: alpha-linolenic and linoleic acid, oleic acid, palmitic acid, the flavanoids: quercetin and kaempferol, and the isoflavone daidzin. Further present in lesser concentrations were tocopherols, polyphenols, carotenoids and phospholipids, and caffeic acids such as rosmarinic acid and chlorogenic acids such as ferulic acid.

Studies on a small group of individuals reveal that topical application of chia oil is beneficial as a soothing moisturizer in cases of itchy irritated skin. Yet most other studies are on individuals who eat the seed for its beneficial effects on supporting cardiovascular health. Chia may also be helpful in maintaining a healthy balance of fats in the bloodstream.

Remember the terra cotta animals that would magically grow hair when filled with water? Chia Pets were coated with, as the name suggests, chia seeds. This novelty item has delighted children for generations thanks to the man that made these pets so famous, Joe Pedott. When he was 25, he moved to San Francisco, opened an advertising firm, and quickly had his first encounter with a chia pet via a business associate who was importing them from Mexico. Pedott bought the rights from his associate and ventured off to Mexico to visit the town where these “animalitos” were made. The rest is history; he settled on the catchphrase "Ch-ch-ch-Chia" and before long was manufacturing, importing, and selling multitudes of chia pets all over the world. Especially popular was his Jerry Garcia chia pet known as the “Chia Garcia.”