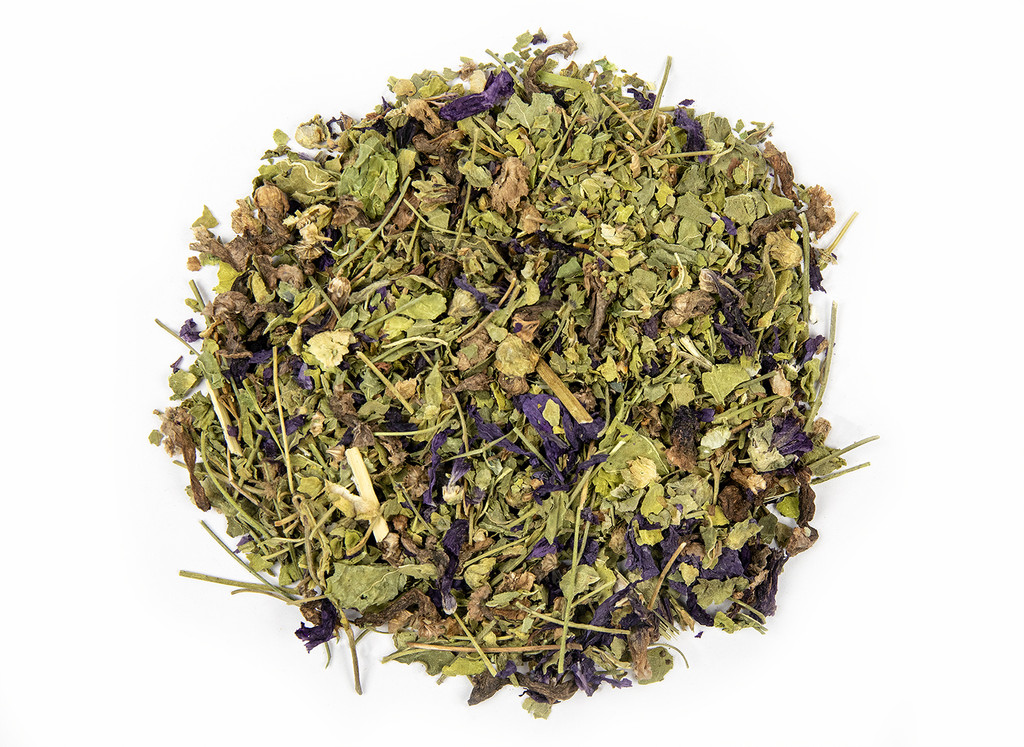 Malva, also referred to as high mallow or common mallow, is an herbaceous perennial used in the past as a food source and for its healthful qualities. Malva sylvestris is recognized by its lobed, dark green leaves and showy, purple-pink, five-petaled flowers. Mallow leaves can be used in hearty broths, soups, and sauces. Mucilaginous in nature, malva leaf can also be prepared as an extract, herbal infusion, or applied externally.

Malva is native to western Europe, northern Africa, and Asia. Also known as common mallow, the herbaceous perennial is now naturalized around the world. Malva has been used as a food source and for its beneficial properties in traditional folk practices for centuries. Historically, the plant was used in a similar manner to its cousin, marshmallow which eventually gained popularity in use over high mallow. The demulcent and slightly astringent high mallow leaves are still a relevant herb today and can be used in a variety of applications including herbal teas and culinary recipes. The well-loved plant also boasts folkloric uses. Mallow flowers were once placed in doorways and woven into garlands as part of May Day celebrations, fostering a sense of love and celebration.

Malva sylvestris is a spreading annual, biennial, or perennial depending on what climate the plant grows in. A member of the Malvaceae family, it can grow up to three or four feet tall with round, lobed, dark green leaves and showy, five-petaled, purple-pink flowers. Mallow grows throughout meadows, hedgerows, fallow fields, and gardens. Its flowers ripen into fruits, or nutlets, which form a ring resembling a wheel of cheese. These nutlets have earned the plant the nickname of “cheeses” and were oftentimes considered a snack for many foragers, gardeners, and children.

Malva leaves have been eaten as a vegetable for hundreds of years and are still enjoyed in some cultures today, including in traditional North African dishes. Mucilaginous in nature, mallow leaf can be added to soups and broths as a thickening agent as well as for its wellness-supporting properties. The leaf can also be prepared in cold water infusions or decoctions and is equally enjoyed as a beautiful and healthful addition to loose-leaf herbal tea blends. Malva can even be extracted, used in herbal syrups, or prepared in cosmetic creations.

Precautions
Should be taken with at least 250 ml (8 oz) of liquid. Orally administered drugs should be taken 1 hour before use or several hours after, as Malva may slow the absorption. We recommend that you consult with a qualified healthcare practitioner before using herbal products, particularly if you are pregnant, nursing, or on any medications.