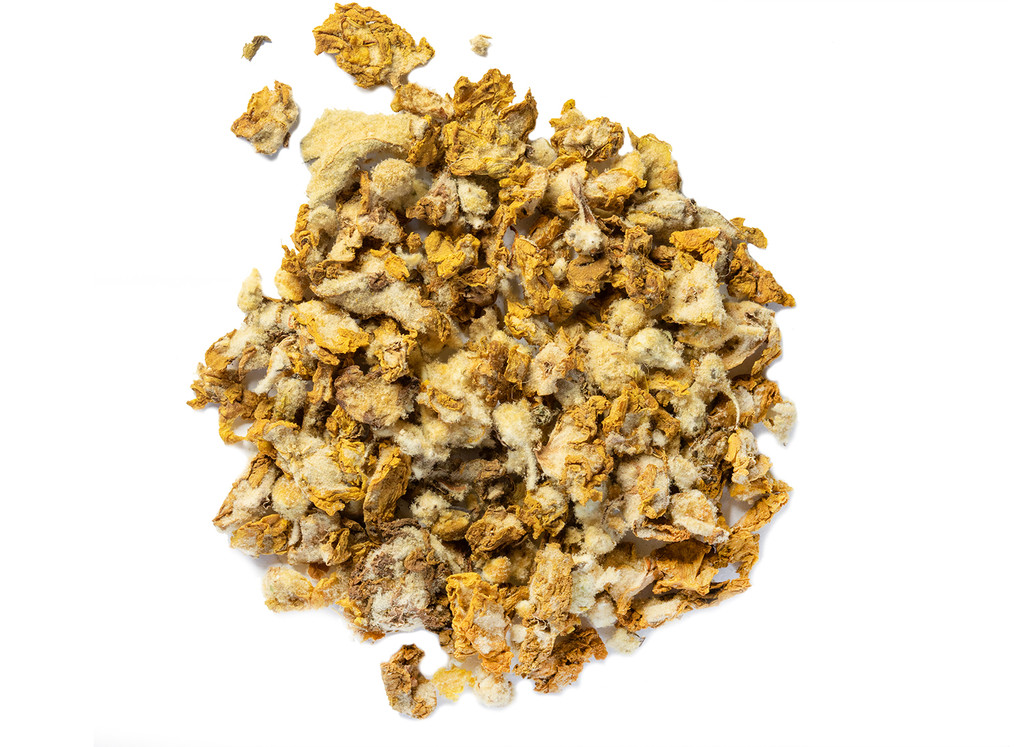 Verbascum thapsus is a biennial in the Scrophulariaceae family. It has a basal rosette of soft, fuzzy leaves in its first year and a tall flowering spike with small, yellow flowers in its second. Mullein is a gentle plant that has been used in traditional European herbalism for centuries. Typically, mullein flowers are infused as tea or macerated in oil for topical applications. Mullein flower can also be tinctured or blended into herbal formulations.

Mullein has a tradition of unique uses extending centuries. The entire plant, roots, leaf, and flower have all been utilized in traditional European herbalism for their healthful properties. Dioscorides, a Greek physician practicing in 1st century Rome, recommended mullein for its supportive tonic qualities. The plant was also employed as a hair wash in ancient Rome, where the leaf ash darkened, and the yellow flowers lightened hair.

Mullein was held in high esteem throughout Europe and was brought over to the Americas by settlers. Like many herbs of European origin, mullein grew abundantly in its new habitat. Native American healing traditions began to incorporate the herb into their repertoire as Eclectic physicians took note and used the plant for its demulcent qualities and as a mild nervine.

Verbascum thapsus is a member of the Figwort or Scrophulariaceae family. It has numerous common names including; torches, velvet dock, candlewick plant, blanket herb, shepherd’s staff, fluffweed, Aaron’s rod, and more. Mullein is a biennial, producing grey-green, fuzzy leaves in the first year and a tall, erect flowering spike with densely packed, small, yellow flowers in the second. Its leaves form a basal rosette and can grow quite large. The whole plant, with the exception of the flowers, are covered in downy hairs so that the plant appears to be silver.

Mullein is native to Europe and western Asia and is now widely naturalized throughout the world. Many people know the plant as a weed, as it spreads easily in disturbed soils. Mullein’s deep roots help to break up the soil and draw up toxins, while the dead foliage from second year plants add nutrients back to the earth, improving the condition of the land where it grows.

Besides its utilization in traditional healing practices, mullein has a long history of innovative uses and folklore. Employed as tinder, the leaves were dried and rolled up as candle wicks. In addition, entire dried stalks were dipped in a flammable substance and used as torches, hence the nicknames “candlewick plant” or “torches”. Mullein’s range of folk uses extend from nature’s toilet paper to warding off evil spirits. Its magical properties were considered numerous and the plant was thought to attract love and to instill courage and health. It was believed in some ancient circles that wearing mullein would ensure fertility and also keep potentially dangerous animals at bay while out in the wilderness. Allegedly, a practice for love-struck men in the Ozark mountains consisted of pointing the flowering stalk toward the direction of his love’s house and seeing if the stalk went upright again. If it did, the love was considered reciprocated.

Mountain Rose Herbs makes two products in our kitchen that include mullein flowers, our Mullein Herbal Oil and Ear Oil. Mullein flowers are commonly infused in oil for topical application and can be combined with garlic oil for their affinity with the ears. The flowers can also be added to herbal tea blends and syrups or used in tincturing.