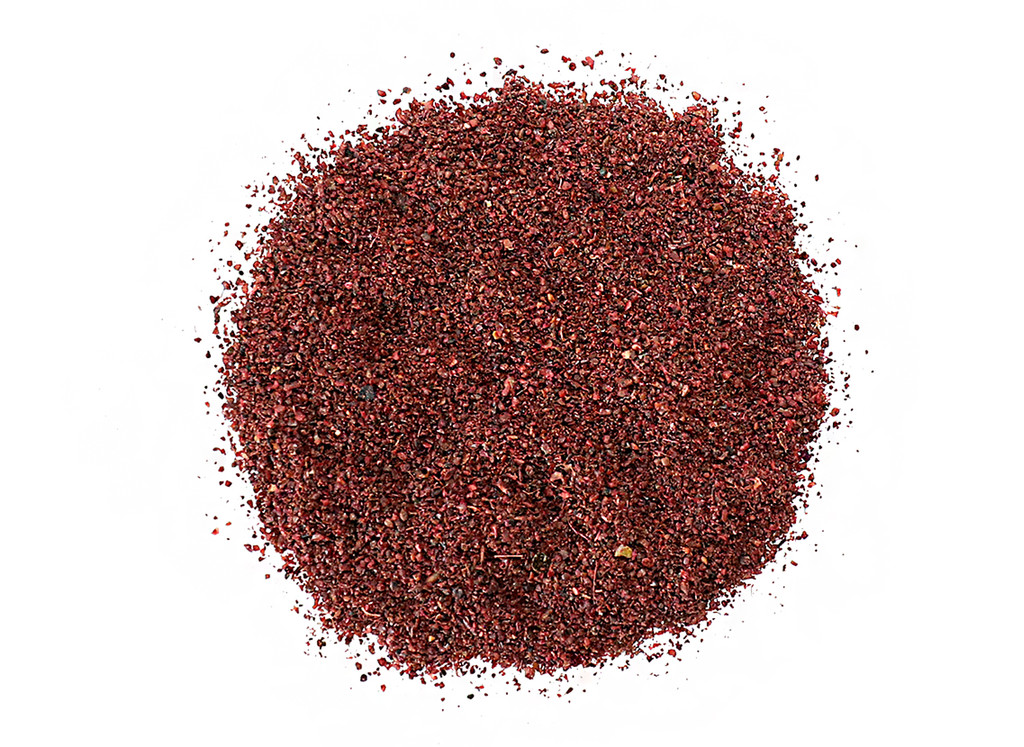 The red, showy berries of sumac are hard to miss, standing upright like torches. A relative to poison sumac (Toxicodendron vernix), Rhus coriaria is perfectly safe to consume and is considered an enticing and flavorful spice that has been in use for thousands of years. Sumac berries are known for their sour and tart flavor and are a unique substitute for lemon in a variety of dishes. For as long a sumac has been a spice, it has also been utilized in traditional forms of healing for its healthful qualities.

The etymology of sumac traces back to several ancient languages including French, Latin, and Arabic and translates to ‘red’. A member of the cashew family, Anacaridaceae, it is a cousin to poison ivy, poison sumac, and mango. The Sicilian sumac of Europe and the staghorn sumac of North America can both be identified by their pinnately compound leaves and upright spikes of dense yellow-green flowers which ripen into clusters of bright red, velvety drupes. Poison sumac on the other hand grows in swampy ecosystems and is distinguished by creamy, white fruits which droop over instead of standing vertical.

Native to southern Europe and western Asia, Rhus coriaria is a small deciduous shrub. There are approximately 35 species in the genus which grow throughout subtropical and tropical regions around the world. Its fruits are typically harvested in late summer or early fall and are dried then ground for use, resulting a reddish-purple powder. Mainly employed as a tangy spice, sumac berry powder also has a long history of use for its beneficial properties and nutritious value. Sumac berries are considered energetically cooling.

Sumac was a popular spice in ancient Rome due to its tart, lemony, and astringent notes. Similar to salt, sumac berry powder highlights the natural flavor of foods. The tangy spice can be used as is or combined with other spices such as in the popular Middle Eastern seasoning blend za’atar. It especially shines when sprinkled on top of a dish just before use and can be blended into vinaigrettes to add bright and sour notes. Dyes of varying colors are made from different parts of the plant and the tannins of the bark were used in the manufacturing of leather.

A healthful North American tradition was to make an infusion of sumac berries for hot weather. This beverage dubbed ‘sumac-ade’ or ‘pink lemonade’, sometimes had orange peel added or was sweetened with sugar or honey. This infusion was popular in the hot summer months to provide some reprieve from the sweltering heat. Try sprinkling sumac berry powder on top of dips ranging from hummus to simple olive oil, salads, and rice dishes. A beloved Middle Eastern spice, sumac is often added to spice blends, marinades, and kebabs. Typical preparations of sumac powder also include an infusion or syrup with elder berries for an added wellness boost during seasonal transitions. Sumac berry powder can even be made into a tincture.

Disclaimer Statement
This information has not been evaluated by the Food and Drug Administration. This product is not intended to diagnose, treat, cure, or prevent any disease. For educational purposes only.