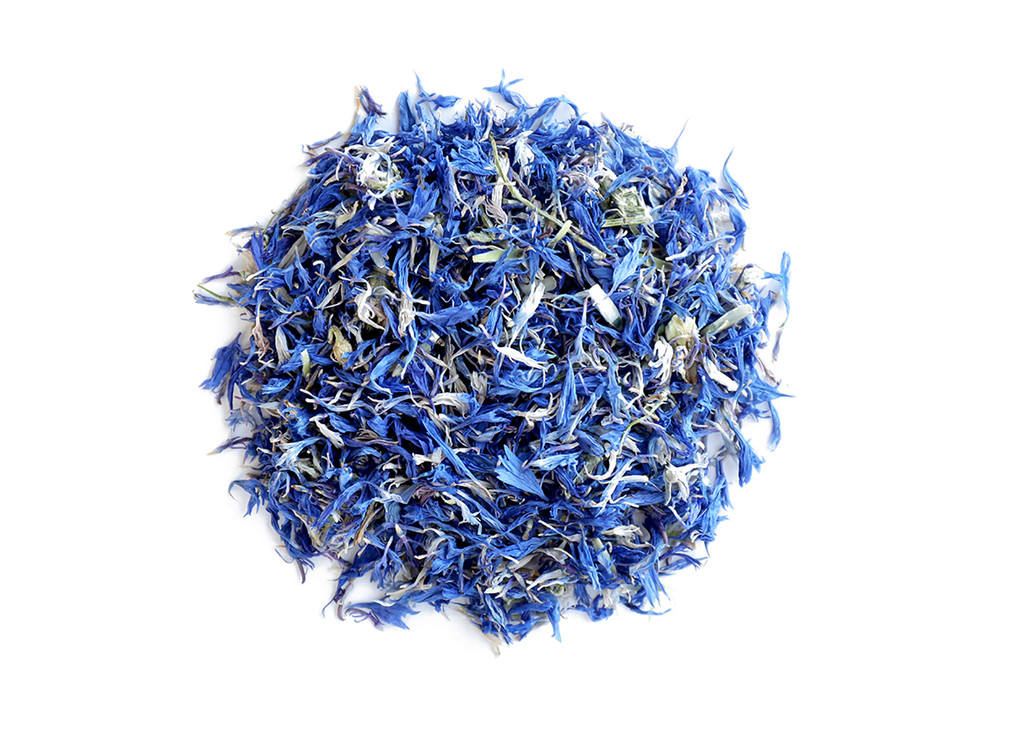 Cornflowers were once a common sight throughout farmed fields and along roadsides. Nowadays, the showy flowers are mostly seen in gardens as a popular cultivated plant. It has many common names and is often called bachelor’s button, bluebottle, bluebow, and blue cap. The use of cornflowers dates back to ancient Egypt. For millennia, the bright blue flower heads have shown themselves peeking out amongst fields of cultivated cereal grains such as corn, wheat, barley, and oats. The plant’s tough stems made it difficult to cut down with the farmer’s sickle, earning it yet another name, hurtsickle.

For thousands of years, cornflower petals have been used in long standing wellness practices. In traditional European folk herbalism, the flowers were employed in a similar way to blessed thistle. Cornflowers were also utilized as a tonic herb and were often blended into herbal teas for both their beauty and their healthful qualities. The evocative purpleish-blue petals are also popular additions to potpourri mixes, adding a pop of color and a subtle, sweet scent. Although blue cornflower is most often infused, it can also be incorporated into baked goods and cosmetic recipes or prepared as a watercolor dye.

Centaurea cyanus grows to a height of one to three feet. Its leaves are long, narrow and alternate and are covered with white, downy hairs. The solitary flowers bloom at the end of long, erect stalks which are also covered with white down. Belonging to the Asteraceae family, corn flowers have brilliant blue, star shaped ray and disc flowers which are packed into its flower head. These flowers persist throughout the summer. The vivid blue pigment of cornflower petals is due to protocyanin, the same anthocyanin pigment that’s responsible for turning roses red. Originally native to Europe, cornflowers are now naturalized throughout the world.

Cornflowers have a host of folklore surrounding them. Its genus name, Centaurea, is derived from Chiron, a centaur of Greek mythology who was revered for his knowledge of botany, herbs, and medicine. Also, according to Greek legend, the cornflower was a favorite of an admirer of the goddess Flora and its species name, Cyanus, was named after him. In the past, cornflowers were once worn on the lapels of young men in love. It was said that if the flower wilted quickly, then the love was not reciprocated.

The cornflower is the national flower of Estonia and a symbol of numerous European political parties and educational institutions. Additionally, it made its way into the writings of famous authors as well as many notable paintings. Besides its symbolism for social change, cornflowers have persevered as a symbol of fertility and renewal dating back to ancient Egypt. Also called bachelor buttons, cornflowers have a long history of use in folk herbal practices for their beneficial properties. The flowers are typically added to herbal infusions, steeped as cornflower tea, or added to potpourri.