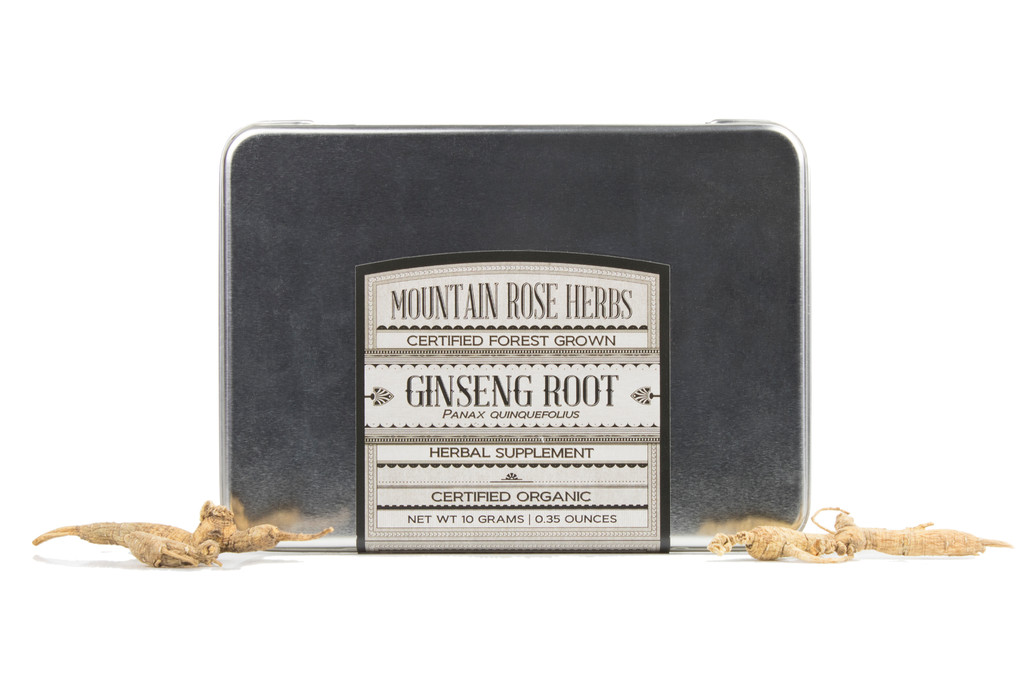 Panax quinquefolius root is highly sought after domestically and abroad for its wellness-supporting qualities. American ginseng grows in specialized woodland habitats throughout eastern North America. Ginseng root is currently experiencing population decline due to its popularity, over harvesting, poaching, and habitat loss. To help counteract these factors, we are proud to provide Forest Grown verified ginseng root. These roots are sustainably harvested from private forests that are stewarded by farmers dedicated to ecological and medicinal plant preservation.

Thank you for your interest in our new Forest Grown Ginseng Root. Each tin contains 10 grams of this valued botanical. These roots have been cared for in their natural environment for at least 7 years before they were harvested. They are much smaller than the organic farm cultivated roots that are on the market.

Why is this root so special?
We are proud to offer the first Certified Forest Grown American Ginseng in partnership with the United Plant Savers. This new project brings us organically grown ginseng roots that are cultivated in their native ecosystem. The roots are sustainably harvested from private forests that are stewarded by farmers dedicated to preserving this important medicinal plant for the future.

Mountain Rose Herbs will donate 5% from every sale of this precious ginseng root to the United Plant Savers.
We believe that supporting this effort can change the culture of ginseng throughout Appalachia, transforming the epidemic of black market poaching into a stewarded forest crop with sustainability as the guiding force.

We thank you for supporting conservation through cultivation!

There are few plants in the world that possess the rich history and lore of the ginsengs. Asian ginseng (Panax ginseng) has likely been used as medicine since the dawn of civilization in Asia; its first written mention came in the first century B.C. and the earliest mention of ginseng in formal Chinese medical literature was in The Divine Husbandman’s Classic of the Materia Medica, written in the first century A.D. American ginseng first became known in 1711 through the writings of a Jesuit missionary to Beijing named Pere Jartoux. Interstingly, Jartoux had also spent some time in eastern Canada, and had observed the botanical similarities between the forests and mountains of eastern Canada and the forests and mountains of Jilin province in eastern China where Asian ginseng grows prolifically. He speculated that if ginseng were to be found anywhere else, it would be in eastern Canada. Joseph Francois Lafitau, a Jesuit missionary based in eastern Canada, was influenced by Jartoux’s writings and set out to find ginseng in the West. Lafitau was unsuccessful in his attempts to locate ginseng in the woods, and sought counsel with the local indigenous population. Legend has it that one of these people walked a few feet away and brought him one of the roots. At the time of this discovery, the Chinese stock of wild ginseng was becoming rare due to overharvesting, and there was an eager market that was willing to import American ginseng by the ton. And thus the American ginseng trade was born in earnest. Unfortunately, history has a way of repeating itself, and American ginseng soon became rare in eastern Canada and the United States due to overharvesting.

The vast majority of research regarding ginseng has been conducted on the Asian variety, rather than the American. In Traditional Chinese Medicine, American ginseng is considered to be a mild chi tonic which moisturizes the system and reduces heat while building strength. American ginseng also supports a healthy response to stress*, making it a valuable ally to the modern lifestyle.

*This statement has not been evaluated by the Food and Drug Administration. This product is not intended to diagnose, treat, cure, or prevent any disease.