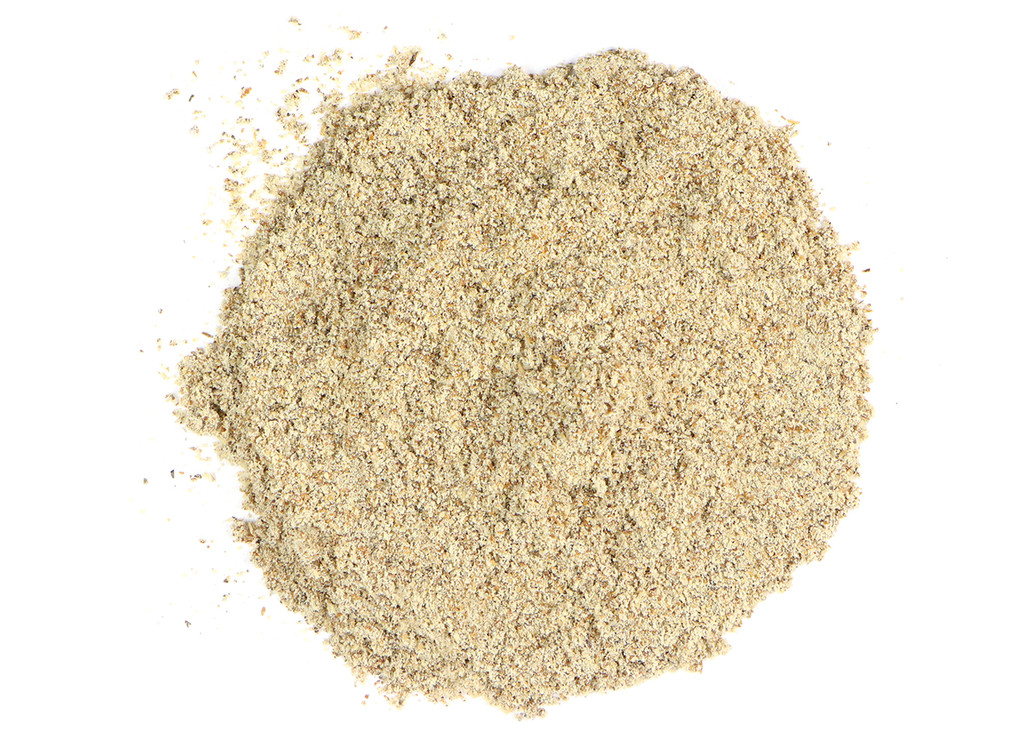 Silybum marianum has been used for thousands of years as an edible food and for its healthful properties. Our organic milk thistle seed powder is perfect for tincturing or encapsulating. Other uses for milk thistle powder include infusing oil for cosmetic preparations and incorporating into culinary dishes such as smoothies, stews, and soups.

Milk thistle has been revered for thousands of years as an effective herb. However, early on all parts of the plant were used for a variety of purposes. The leaves were extensively utilized and often eaten as a vegetable.

Silybum marianum grows as an annual or biennial from three to seven feet in height, has smooth, shiny, lettuce-like leaves with white veins and spines along the margins, and a solitary purple flower that can grow up to two and a half inches in diameter. It is native to the Mediterranean region and southwestern Europe and has been widely cultivated for hundreds of years. In the U.S, it is considered a noxious weed in several states, particularly in the Pacific Northwest in states such as Washington. It is a member of the vast sunflower or Asteraceae family, which encompasses a wide variety of well-known plants such as lettuce (Lactuca sativa), the common daisy (Bellis perennis), the blessed thistle (Cnicus benedictus), and artichoke (Cynara cardunculus var. scolymus), to name a few. Many of the common names, and the outdated Latin name, refer to the belief that the milk of the Virgin Mary dropped on the plant leaving behind the milky white 'marbling' that give the leaves their very distinctive coloration.

Harvest seeds by cutting off flower heads at the end of the growing season, often May-July, when white cottony fibers (pappus) appear. Dry flower heads in a warm, sunny place for around a week. Put in a burlap bag and tumble the bag around. Then chop the flower heads to remove seeds, and winnow in the open air.

In ancient Greece and Rome, it was the leaves that were utilized for their beneficial properties. However, Dioscorides does mention the usefulness of the seeds, as they were helpful for venomous stings and bites such as snake bites. Another, association, however peculiar, is made with snakes. An old wives' tale suggested that a man wear milk thistle around his neck in order to inspire aggression among snakes. It is rather curious why anyone would want to do such a thing…

Nicholas Culpepper, the 17th century botanist, avid astrologer, physician, herbalist, and author of the Complete Herbal (1653 CE), also concluded that both milk thistle and blessed thistle shared similar qualities. Culpepper, alongside many other herbalists of the time, also recommended boiling the young, tender plant as it had virtue as a spring tonic or alterative. During those times it was often eaten like boiled cabbage (after removing the spines, of course). The flowerheads, similar and related to the artichoke, were eaten as well. All parts of the milk thistle plant were utilized, including the root. Eventually, milk thistle seeds were incorporated into the Eclectics practice (physicians who practiced a branch of American medicine popular in the 1800-early 1900's which made use of botanical remedies) as a remedy for "congestion of the liver, spleen, and kidneys.”

Each flower can produce up to 190 seeds, averaging 6,350 seeds per plant in its lifetime! This is great news for the herbalist, but not so great news for those waging a war against invasive species. (weeds).

Precautions
Milk thistle may cause an allergic reaction in people who are sensitive to the Asteraceae (Ragweed) plant family. We recommend that you consult with a qualified healthcare practitioner before using herbal products, particularly if you are pregnant, nursing, or on any medications.