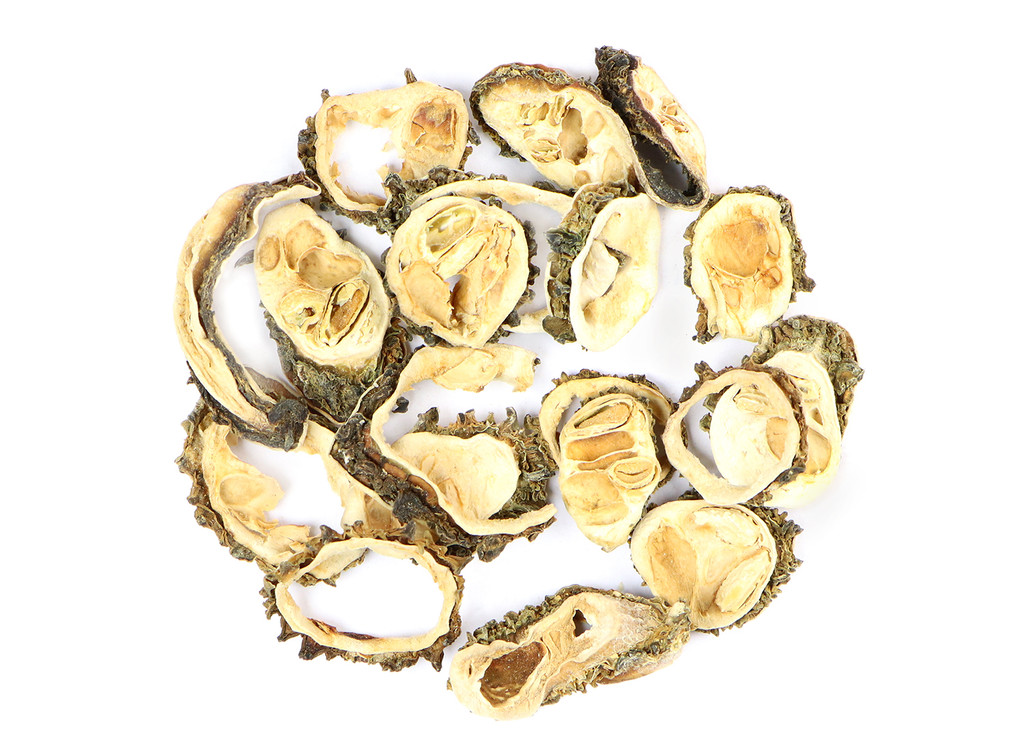 Momordica charantia is a warty green vegetable resembling a cross between a cucumber and a gourd. It is commonly used as a food source in its native tropical regions of Asia and Africa. Traditionally added for its bitter flavor in soups and curries, bitter melon is also employed in Ayurveda for its beneficial properties. The dried fruit can be rehydrated and used in pickling blends and culinary recipes or steeped as bitter melon tea.

The bitter melon is a tendril bearing vine with yellow flowers and is a member of the squash family. It has a hollow cross section filled with large flat seeds and pith. It is grown specifically for the cultivation of its fruit, which is thought to be the bitterest edible fruit in the world. It is widely grown and cultivated in Southeast Asia, China, Africa, and the Caribbean.

The seeds, leaves, and vines have been used in traditional Chinese medicine for centuries, but only the fruit is primarily used today. Bitter melon fruit helps maintain already healthy blood sugar levels.*

Bitter compounds evolved in plants as a self-defense mechanism to deter consumption by animals, though humans have developed a taste for the bitterness. The melon is typically stuffed, curried, or pickled and can also be used in stir fries, soups, teas, and beer. Garlic and chili peppers can be added to recipes to help offset the bitterness.

Bitter melon is a popular ingredient in Asian cooking, used to flavor diverse recipes including stir-fries, curries, soups, soft drinks and beers. The recipes vary from country to country, but it is a lively and important part of regional cuisine. The bitterness of the melon may make the fruit unpalatable to some folks, but the potency can be reduced by salting, blanching, or pickling. The fruit is generally consumed before fully ripening while the melon is still green. Other common names for bitter melon include African cucumber, balsam pear, bitter gourd, and karavellaka.