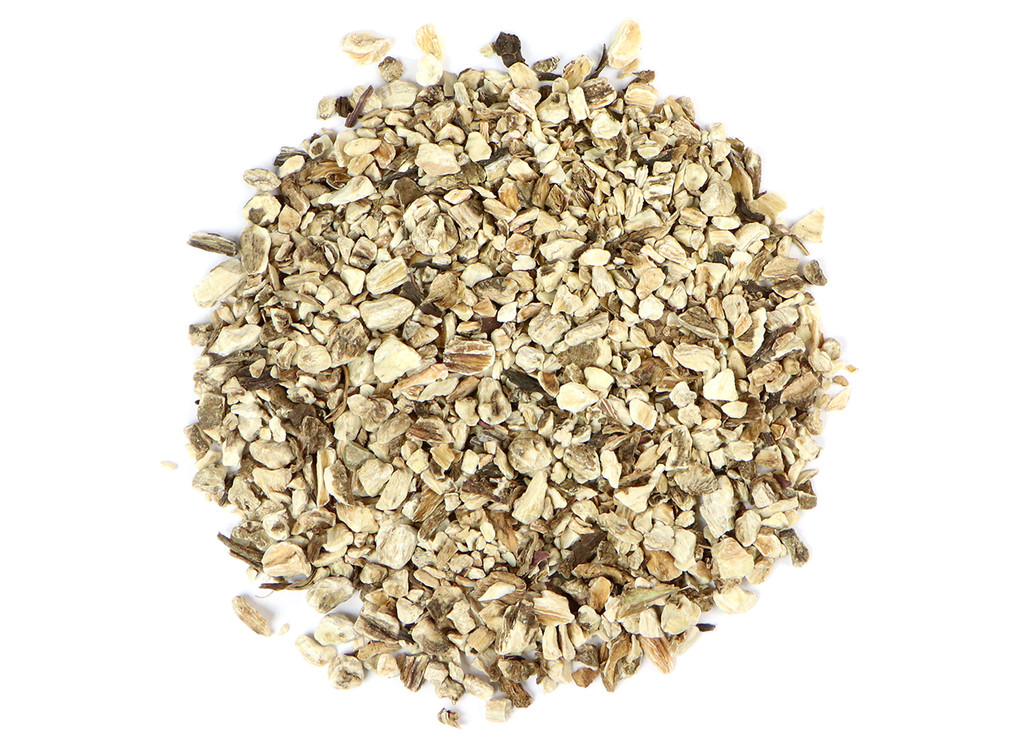 Our organic burdock root is cultivated with great care in the Pacific Northwest. Arctium lappa has a long tradition of use in western herbalism as well as throughout the Far East. This versatile root has a myriad of internal uses and has been used as a food plant in Eastern cuisine.

Burdock has been an important botanical in Western folk herbalism and traditional Chinese medicine for thousands of years, primarily valued for its cleansing and skin smoothing properties. The entire plant is edible and is a popular vegetable in Asia, particularly in Japan. More recently, burdock has been an ingredient in hair tonics and in cosmetics for mature skin.

A biennal member of the Asteraceace family, with bright pink-red to purple thistle-like flowers on long stalks, and oblong to cordate, huge hairy leaves that is native to Europe and Asia, and now naturalized in North America and Australia. This plant can grow to a very robust height, reaching up to 9 feet, and its aromatic "carrot-like" taproot can grow as much as 3 feet deep into the ground (making them difficult to harvest). It is naturalized and abundant in northern U.S and Europe and is considered a weed in such areas.

The generic name arctium is derived from the Greek word for bear or arktos and the species name, lappa, is from the Latin word lappare which means "to seize." The fruit (bur) looks rough and hairy resembling a big, fuzzy bear and will grab on to anything in the vicinity in order to spread its seed, hence the name. Its common name is derived from the French word bourre referring to a tangle of wool (often entangled with burs) and the German "dock" referring to large leaves. Various species, such as A. minus or A. tomentosum, may be used interchangeably. However, burdock is often confused with cocklebur or Xanthium spp. that has entirely different properties.

Seeds are picked in the fall and can be loosened from the chaff with a rolling pin. Harvesting the roots is no easy task yet can be done in the fall of the first year or spring of the second, preferably the former. According to the late herbalist Michael Moore "harvesting full flowered plants in the fall can be as much work as digging up a small tree"

Burdock is an all-purpose herbal that has been used continually for myriad purposes the last few thousand years in Asia and Europe, and more recently in North America. It is a food plant called gobo in Japanese and is a much-consumed vegetable in Japan. The root may be eaten fresh or cooked and the young leaves can be cooked like any other vegetable. The stalks have a taste somewhat like asparagus and can be eaten raw in a salad, boiled, or candied with sugar.

In traditional Chinese medicine, burdock fruit has been used continually for thousands of years. It is known to balance internal heat, is specifically helpful for supporting skin health, and is associated with lung and stomach meridians. It is considered energetically cold and having a slippery consistency that soothes mucus membranes. The root is also commonly cooked in order to change its energetic properties and specifically to make it easier to digest. In European folk medicine, an infusion or decoction of the seeds was employed as a diuretic. It was helpful in enhancing health through supporting digestion, and as topical poultice.

-Culpepper in his Complete Herbal, written in 1653, says the following about Burdock:

It is so well known, even by the little boys, who pull off the burs to throw and stick upon each other, that I shall spare to write any description of it……The Burdock leaves are cooling and moderately drying. The leaves applied to the places troubled with the shrinking of the sinews or arteries, gives much ease. The juice of the leaves, or rather the roots themselves, given to drink with old wine, doth wonderfully help the biting of any serpents.

Further, Culpepper, an avid astrologer in addition to being an herbalist, considered burdock to be a feminine plant, ruled by the planet Venus and took this into consideration when preparing his burdock elixirs. Traditionally the root was thought to carry magical power, particularly powers of protection and healing. It was believed that wearing a necklace that is made from the root, gathered during the waning moon, would protect the wearer from evil and negativity. In the Native American healing tradition, the plant was used by the Malecite, Micmac, Ojibwa, and Menominee for skin health. Further, the roots were dried by the Iroquois over a fire and stored for food for the following year. They also utilized the related A. minus in medicinal baths.

According to the William Cook, author of the Physio-medical Dispensatory in 1869, burdock "enters into a sort of family beer along with such agents as yellow dock, spikenard, elder flowers, and ginger" making a beneficial spring beverage. Herbalist Matthew Becker states that burdock is a "potent yet safe lymphatic decongestant.” Also, that as a subtle alterative it works best over time and demonstrates restorative properties due, in part, to its bitter tonic effects on the digestive system. It also contains inulin which feeds the healthy bacteria in the colon.

Burdock is considered by many herbalists to be the best known medicinal for skin conditions (Hoffman, Moore). This herb is highly effective, gentle, and multipurpose. It promotes the flow of bile and also increases circulation to the skin. Further, it is a mild diuretic and lymphatic. Burdock is used widely as an alterative and blood purifier. The leaves can be made into a fresh poultice to soothe poison oak and poison ivy and a leaf decoction makes a therapeutic wash for the skin.

Dried root as a cold infusion, decoction, or tincture.

The inspiration for Velcro came from the burdock bur. The inventor, a Swiss electrical engineer named Georges de Mestral, was walking along one day in the mountains and saw burs sticking on his wool socks and his dog's fur. He went home and examined the barbed, hook-like seeds that make up the fruit and thought he could replicate this "gripping" action in the laboratory. And so he did, and, in 1955, Velcro was patented and released to the world.