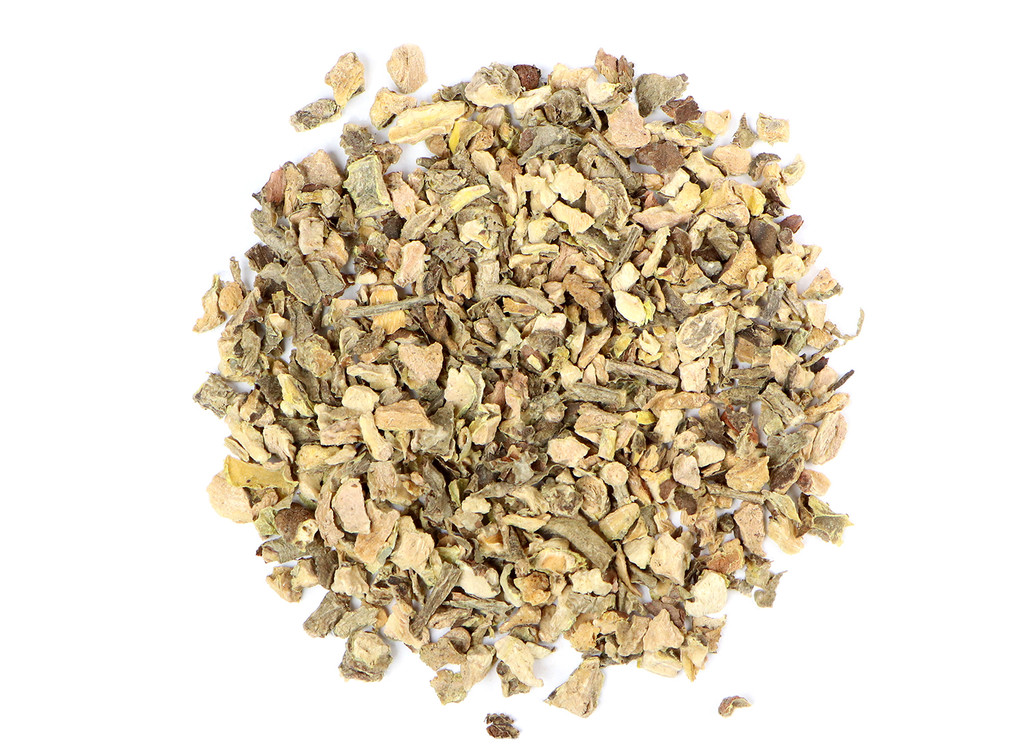 Rhodiola rosea is one of 90 rhodiola species and has been utilized for thousands of years throughout Europe and Asia. Due to its popularity worldwide, overharvesting of wild rhodiola populations has become a threat. We support farm partners who organically cultivate rhodiola root to help ensure the future sustainability of the plant. The floral-scented, purple-hued root is typically steeped as rhodiola tea, blended into herbal infusions, and tinctured.

Now certified organic! The floral scented rhodiola root, used for thousands of years in Europe and Asia, has just recently been introduced to the U.S. Traditionally; one of its main uses in the Himalayas was for occasional altitude related discomforts.

Our rhodiola root is coming from one of the few cultivated varieties in the world. It is grown and tended in soil free from chemicals and pesticides and is in accordance with the Good Agricultural and Collection Practice for Herbal Raw Materials (GACP). The GACP ensures herbal raw material will be correctly identified, non-adulterated, has accurate representation regarding the quality of the product, and is sustainably harvested.

Rhodiola rosea is only one of 90 Rhodiola species (55 of which are found in China, and 30 of which can be found in Tibet) all of which resemble sedum (Sedum sp.), the popular garden ornamental, and are members of the Crassulaceae family. Both of these genera are often referred to as 'stonecrops' due to their ability to survive in dry rocky areas. Many different species are used traditionally and somewhat interchangeably. The following have been used in Traditional Chinese Medicine (TCM) R. crenulata, R. sacra, R. algida, R. dumulosa, R. henyri, R. rosea, R. yunnanensis, R. kirilowii, R. sachalinensis. R. rosea is a perennial that prefers arid sandy soil and grows at very high altitudes, particularly in the arctic areas of Europe and Asia.

Rhodiola grows in North America as well, in Canada and in the United States. In the U.S. it is native to eastern Maine and southern Vermont (although in Vermont it is considered extremely rare and threatened), and introduced to Connecticut, Alaska, Maine, New York, Pennsylvania, and North Carolina, and can possibly be found in mountainous regions in several other states. This species has a fragrant rose smelling rhizome, hence the name of the specific name 'rosea.' The generic name refers to its fragrance as well, and is derived from the Greek 'rhodon', which also means 'rose'.

R. rosea may grow up to 20 years before being harvested in the wild. Popularity of this herbal supplement has led to overharvesting in the wild in recent years. Several states and countries are avidly working to protect this species from extinction by classifying it as endangered. Thus, globally, a high demand for commercially cultivated R. rosea is underway.

The use of Rhodiola for medicinal purposes dates back to the time of the Greek physician, Dioscorides, who documented its use in 77 C.E. In his medical text De Materia Medica, he referred to it as 'rodia riza', Linnaeus eventually extrapolated its Latin binomial from this term. It has been used in folk medicine for more than a thousand years with some of its first recorded uses being in Tibet and China. It was originally utilized in Tibet, where at least 30 different Rhodiola species are found and where some of the towns boast an altitude of over 10,000 feet. Villagers in the mountainous regions of Siberia gift a bouquet of rhodiola root as a good luck charm to couples before their marriage ceremony with wishes of fertility and happy children. In Asia, a tea of rhodiola was considered to be helpful, especially in winter months.

The harvesting and preparation of rhodiola, referred to as 'golden root,' was a well-kept family secret in these regions for generations. In Siberia it was taken, in secret to the Caucasian Mountains where it was traded for a variety of goods including wine and honey. In ancient times, emperors from China used the rhodiola from Siberia for medicinal purposes. In TCM, this root was considered to be a plant which nourished chi (energy or vital force) and encouraged circulation.

This adaptogenic herb has been used as folk medicine for centuries used in Russia, Scandinavia, and in many other countries. Rhodiola was employed in Russia to boost the stamina of Olympic athletes and was even taken by cosmonauts to support physical and mental performance. The scientific literature from Sweden, Norway, France, Germany, the Soviet Union, and Iceland has supported the efficacy of rhodiola as far back as 1725 and continues to do so. Since 1960, more than 180 research studies have investigated rhodiola's properties particularly as an adaptogen. However, it has only become popular recently in the West, possibly due to the fact that historically, most of the studies were published in languages other than English.