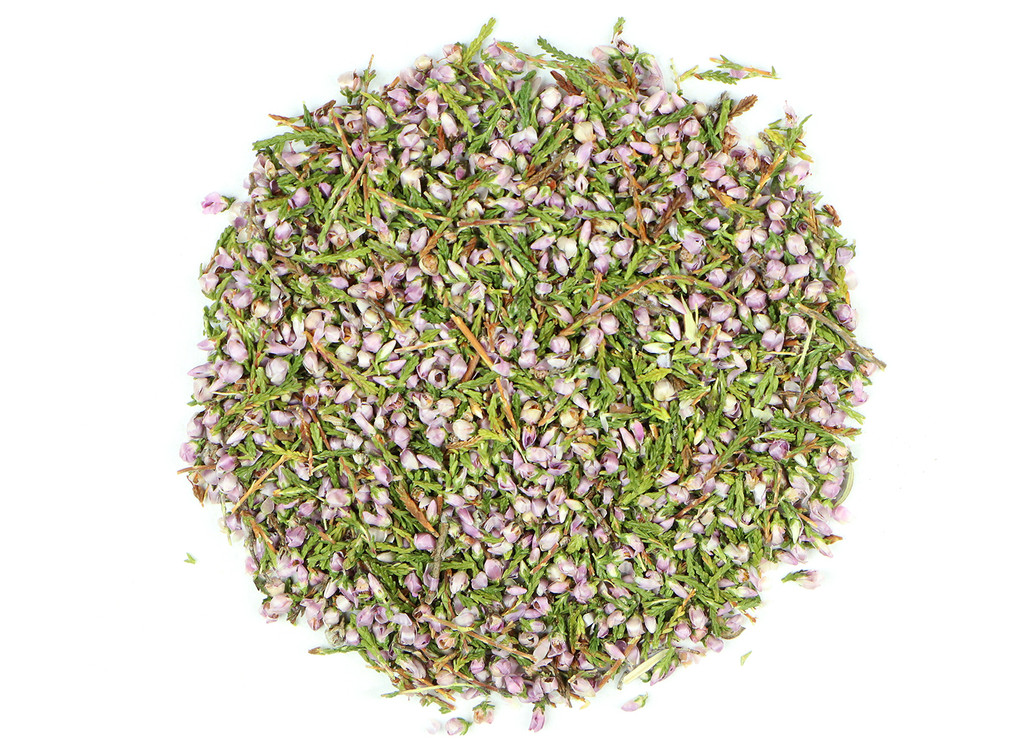 Calluna vulgaris grows throughout Europe and western Asia. It is a notable plant of the British Isles, where the shrub thrives throughout the region’s dry, acidic soils. Heather has been a revered plant in Scotland for millennia and was used as firewood, thatching, bedding, and broom making. Additionally, heather tips were utilized for their wellness supporting properties and as the main ingredient in meads and ales. Heather flowers can be steeped as tea, added to bath and body creations, and used in homebrewing.

Growing throughout Europe and western Asia, heather typically prefers dry, acidic soils and moorland environments. The shrubby plant grows prolifically in Scotland and has been integrated into Scottish culture for an estimated 3,000 years. The woody stems and roots were often used for fire wood, thatching, bedding, basket weaving, and broom making. In fact, the Latin name, Calluna, is said to come from the Greek, “kallyno”, meaning “to cleanse”, “beautify”, or “to sweep”.

The ancient Pictish people of Scotland were renowned for their fierceness in battle and their heather ale. Legend states that the ale, made solely from heather tips or heather honey, was an intoxicating and formidable brew. On the Isle of Rum, archeologists have found traces of a fermented brew made of heather flowers on a Neolithic shard of pottery. Also called ling heather, the flowers and upper leaves were used as fabric dye and employed in traditional European herbalism for their beneficial properties.

Ling heather honey is often sought after for its unique and strong flavor. It is thixotropic – meaning it has a thick, jelly-like texture. When stirred, the honey becomes viscous and readily flows, but once it is left to settle, the sweet substance will once again set to a gelatinous consistency. Heather honey was likely used in the making of mead by ancient cultures.

A member of the Ericaceae family, Calluna vulgaris is a low growing shrub with multiple spikes of pink, bell-shaped flowers. Heather dominates most heathland and moorland habitats, providing an ecosystem for many animals and insects. The woody shrub is often found cultivated and has been introduced to North America, Australia, and New Zealand.

Legend states, that in the fourth century Vikings defeated the Picts in battle. The entire Pictish culture was wiped out, except the king and his son who were cornered on top of a cliff. The Vikings wanted the Pict’s infamous heather ale recipe of which only the king and his son knew. The Pictish king vowed to give it to him if he gave his son a quick death. The Vikings bound his son and threw him off the cliff where he quickly drowned. But the king did not hold true to his word. He asked for a quick death for his son because he feared the son would crack under the torture and reveal the secret ale recipe. The king grappled with the Viking leader and both were hurled over the cliff, along with the heather ale recipe.

Heather is considered a symbol of Scotland and is the national flower of Norway. The flowers are often drunk as tea, which was a favorite of renowned Scottish poet, Robert Burns. Heather is also used in the jewelry industry in Scotland where the roots and stalks are compressed and dyed to make rings and pendants.

Heather flowers and leaf can be enjoyed as an infusion and used topically in skin care products. Historically, a strong tea was brewed and added to baths. Heather flowers can also be infused in honey, added to herbal syrups, used as a dying agent, and employed in brewing recipes.

Precautions
No known precautions.
We recommend that you consult with a qualified healthcare practitioner before using herbal products, particularly if you are pregnant, nursing, or on any medications.