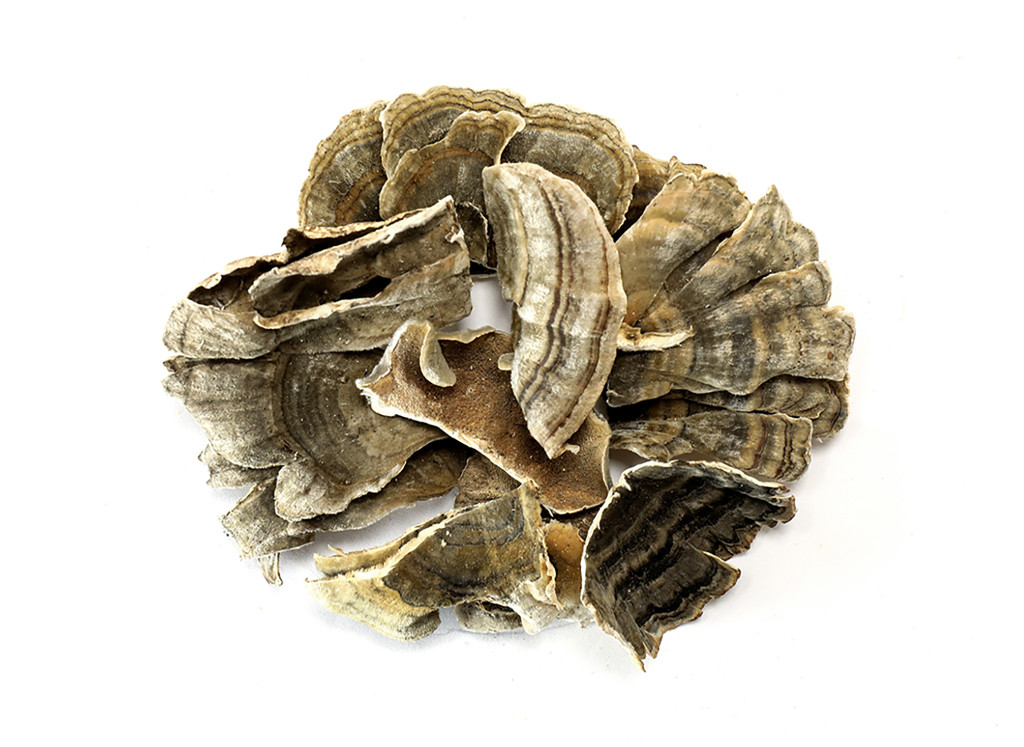 One of the most well studied health promoting mushrooms, turkey tail grows in abundance around the world. Woody and leathery texture, turkey tail is not a choice edible mushroom but it is revered for its beneficial properties in many traditional healing systems. The fruiting body displays stripes of colors ranging from red, brown, and grey, to several variations in between. Combined with their wavy top, these mushrooms resemble the tail feathers of a turkey leading to its convincing common name, turkey tail.

Trametes versicolor is found all over the world growing naturally throughout forests, especially thriving in clusters on hardwood stumps in deciduous woodland habitats. Turkey tail is a polypore mushroom with a pore surface that has an off-white to light brown color and a white to yellow spore print. The shape of the fruiting body is typically fan-shaped, triangular, or round and grows in tiled layers. The offset cap has a fuzzy top surface, resembling velvet. The mushroom’s species name, versicolor, translates to “several colors” which aptly describes this mushroom. Turkey tail mushroom is hailed for its wellness supporting qualities which may be in part due to the amount of beta glucans found in the mushroom.

A traditional medicine for many indigenous populations around the world, turkey tail has been used for millennia for its healthful properties. Turkey tail mushroom is especially revered in Asian cultures and has a long history of use in Traditional Chinese Medicine (TCM) where it is known as yun zhi. In TCM, the mushroom is employed to increase chi, strengthen the lungs, and clear dampness. Additionally, turkey tail mushrooms are used in Traditional Chinese Medicine to support the liver and immune system.* Its first recorded use stems back thousands of years to the Han Dynasty in China. Currently, turkey tail mushrooms are being studied in phase I, II, & III randomized clinical trials. Many of these findings are reporting that turkey tail is utilized to encourage the healthy, daily functioning of the immune system and digestive system.

Whole turkey tail mushrooms can be decocted for use in nourishing teas, broths, and soups. Since they are not enjoyable to eat, we recommend straining the mushroom out before consuming the liquid. Typical preparations also include a liquid extract. Additionally, whole mushrooms can be ground into a powder for use in capsules, smoothies, and healthful culinary dishes.