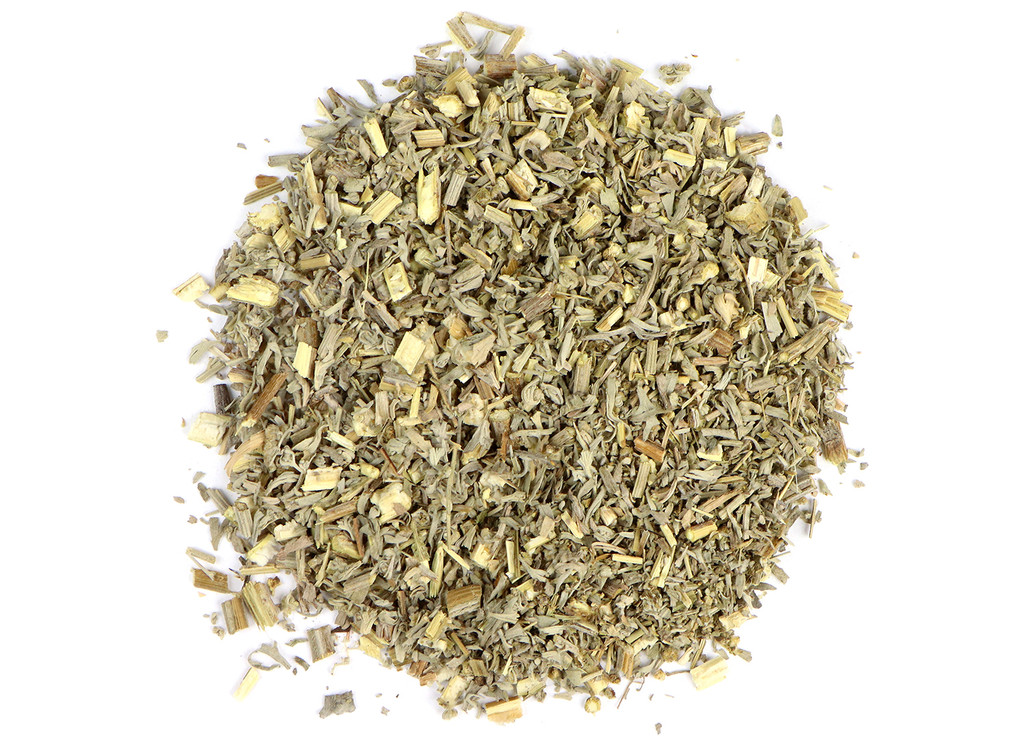 An aromatic and bitter herb, wormwood was once sought after as an ingredient for brewing beer before hops eventually replaced it. Artemisia absinthium is a member of the Asteraceae family and can be found growing wild along roadsides and disturbed places throughout Europe, Siberia, and the United States. Historically, wormwood herb was soaked in various liquors and is a notable ingredient in absinthe. The plant can be infused in herbal tea blends, used in tincturing, and incorporated into other botanical formulations.

An ancient proverb claims, “as bitter as wormwood”, and indeed, wormwood is considered one of the most bitter herbs. It can be found growing wild in disturbed soils and is often cultivated in gardens, acting as a companion plant to deter pests and weeds. Historically, dried leaf bundles were hung inside the house and strewn in pantries and drawers for both its aromatics and to keep unwanted visitors away.

Wormwood is perhaps best known as an ingredient in absinthe, the famous alcoholic spirit noted for its strong effects. The herb has also been utilized for its bitterness, flavor, and green hue in many other liqueurs and aperitifs, including vermouth. Wormwood was employed in traditional European herbalism to support the digestive system. It’s uses date back to ancient Greece where it was utilized for intestinal parasites and as a general wellness tonic.

Artemisia absinthium is one of approximately 180 species in the genus Artemisia and a member of the of extensive Asteraceae family. Native to temperate climates in Europe, Asia, and Northern Africa, wormwood has since naturalized around the world. This herbaceous perennial has tall, branched stems with deeply segmented silver-green leaves. Wormwood can be found growing in gardens or in the wild amongst disturbed places and arid, uncultivated soils.

Wormwood, once a main ingredient in beer brewing, has since been replaced by hops. European folklore suggests that wormwood was utilized in making love potions and even acted as a remedy for accidental poisonings from mushrooms and other plants. Its scientific name, Artemisia, is derived from Artemis, the Greek goddess of wild creatures and the hunt. Greek legend states that the plant was delivered to Chiron, the father of medicine, by the goddess herself. The common name, wormwood, is suggested to have come from its historical use in expelling intestinal worms. Although, another reported root may originate from the Anglo-Saxon word “wermode” or “wermuth”, meaning “mind preserver”.

Try making your own homemade vermouth using this recipe from our blog.

Wormwood herb can be soaked in wine or other spirits. It can also be infused as a tea, incorporated into dream and sleep pillows, or macerated as a liquid herbal extract.

Precautions
Not for use during pregnancy or lactation. Not for long-term use; do not exceed recommended dose. Not to exceed 1.5 g of dried herb in tea, two to three times daily. We recommend that you consult with a qualified healthcare practitioner before using herbal products, particularly if you are pregnant, nursing, or on any medications.