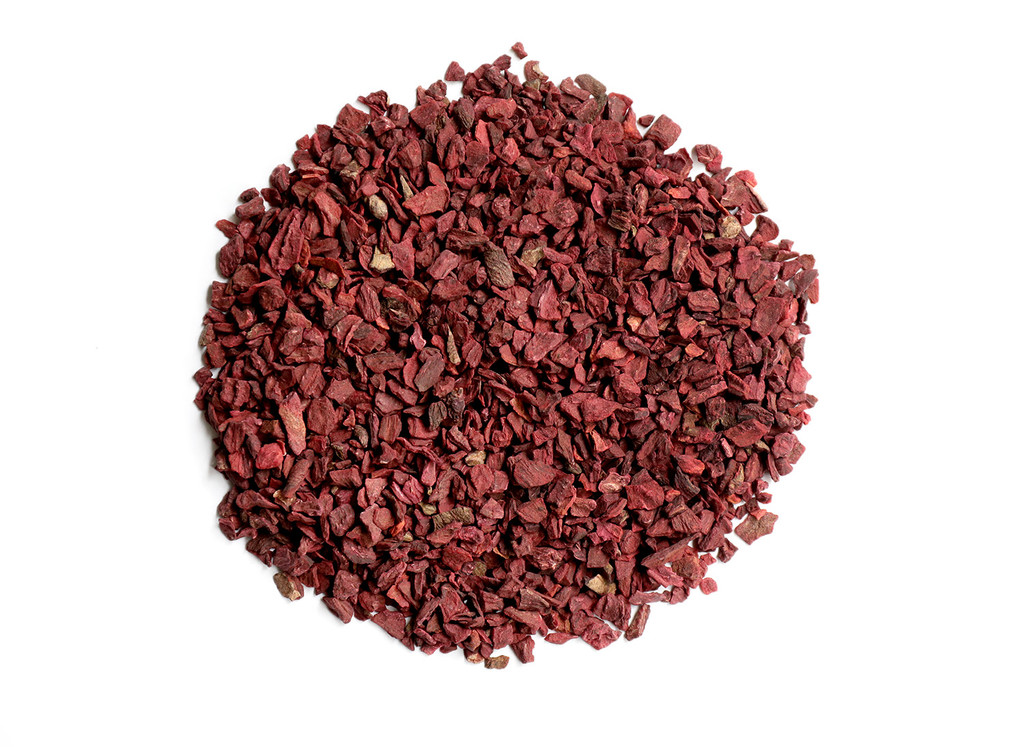 Beta vulgaris is the plump, earthy-yet-sweet root commonly known and enjoyed as a vegetable. For centuries, beet root, which is also commonly spelled as beetroot, has been highly regarded in various cultures for its nutritive and wellness-supporting qualities. Beets are commonly consumed as a vegetable while also providing healthful properties. Our dried organic beet root is delicious in soups, stews, and herbal infusions or simply enjoyed as is.

Beets have been around for thousands of years and beet greens were commonly eaten in ancient Egypt and Rome. Although the leaves were enjoyed for many centuries, the root itself was not widely consumed until French chefs recognized its culinary potential in the early 19th century. However, charred beet roots were found among Neolithic remains at an excavation site in the Netherlands. In ancient times, beets had elongated roots like carrots and the globular red beet we now eat was only hybridized about 300 years ago. Beets have the highest sugar content of all the vegetables and have been popularized as a sweetening substitute, earning it the name of sugar beet. Beet juice and beet powder are used to flavor carrot, celery, and other vegetable juices. Beet juice is also utilized as a natural coloring agent in a variety of foods.

The sea beet, the ancestor of the modern cultivated beet, was probably domesticated somewhere along the Mediterranean. In the Talmud, the rabbis recommended "eating beet root, drinking mead, and bathing in the Euphrates" as part of a prescription for a long and healthy life. During the Middle Ages, Platina in his De Honesta (1460) noted that beet root was good for bad breath, especially "garlic breath". For millennia, beetroot has been used in traditional folk herbal practices for its support of the functioning of the circulatory and digestive systems.

A member of the Amaranthaceae family, Beta vulgaris is an herbaceous biennial and is rarely seen as a perennial. Its roots are swollen and fleshy and can be found in a variety of colors ranging from dark red, golden, or even white.

Wild beets grow on coastal cliffs and sandy beaches throughout Europe, along the Atlantic coasts and the Mediterranean Sea, into north Africa and western Asia. Presently, beets are cultivated around the world. Beta vulgaris is classified into three subspecies which includes cultivated and wild varietals.

Fresh beets are commonly juiced, roasted, and added to salads. However, dried beet root can be stored and reconstituted for use in a multitude of cooking and baking recipes. Rich, earthy, and sweet, beet roots lend their flavor well to both savory and dessert dishes. Additionally, beets can be blended into smoothies or infused in herbal teas. One of our favorite ways of enjoying dried beet root is to simply snack on them.