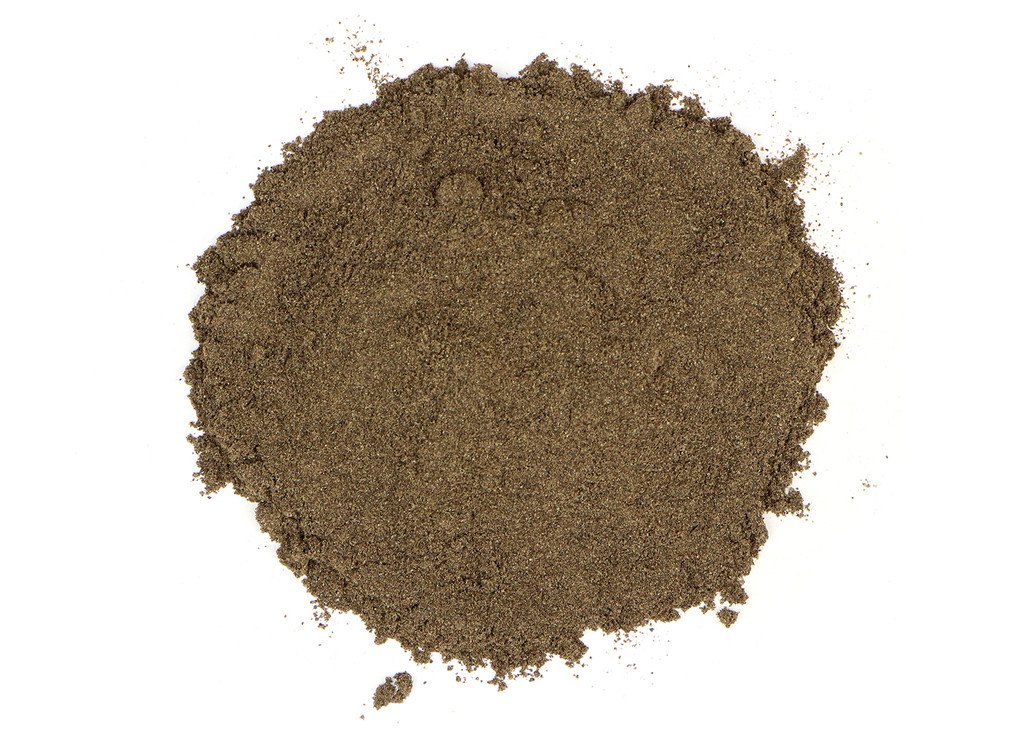 The smallest mesh size of our black peppercorn offerings, our black pepper powder is a super fine grind. Milled from whole, organic black peppercorns, this fine powder will make a great addition to cooking recipes and can be pinched into marinades and on top of meals as a finishing spice. Piper nigrum is widely used throughout the world as a seasoning in culinary dishes and for its healthful properties in herbal preparations.

Black pepper is one of the most commonly used spices in the world, adding warmth and zest to a plethora of savory dishes. A popular herb in India for thousands of years, black peppercorn can now be found almost anywhere on the planet. It has been employed medicinally in both Ayurveda and Traditional Chinese Medicine (TCM) and more recently in herbal folk healing practices. Several derivatives of black pepper, such as piperine, have shown promise in supporting the health of the digestive system.

Piper nigrum is a member of the Piperaceace family alongside plants such as long pepper and kava kava. Black pepper is native to southern India and Sri Lanka and is now widely cultivated throughout the tropics. The pepper plant is a tropical perennial vine requiring a trellis or some other support such as a tree to grow along. It has aromatic, green, ovate leaves that give off a strong fragrance and greenish yellow flower spikes. They bear fruit three to four years after planting and cease around the fifteenth year.

Black peppercorns are immature fruits that are collected and dried in the sun. The peppercorns turn black after three days of drying, and when ground, produce black pepper powder. When the fruits are left to ripen and the papery outer covering is removed, white pepper is obtained.

Alexander the Great fought his way through central Asia making way for new trade routes which led to the eventual availability of black pepper and other spices into Europe. The zingy spice became increasingly popular and was highly traded by the Arabic spice merchants. According to folklore, during the 5th century CE, Attila the Hun demanded 3,000 pounds of pepper as a ransom for the city of Rome. Although pepper was very expensive, it was still utilized often in cooking by the ancient Romans, and by the Middle Ages, became a symbol of fine cuisine.

In Ayurveda and TCM, black pepper is considered a powerful plant useful in a variety of healthful applications. In both systems of healing, pepper is considered to be a pungent tasting and energetically heating spice. In Ayurveda, it is often found in the formula called 'Trikatu' which is used to support digestion. It effects the stomach and large intestine meridians in TCM and is thus employed in digestive complaints and in cases where qi (energy) needs to be directed downward.

Black pepper powder makes a lovely addition to spice blends and marinades. Pinch or sprinkle this finely ground black pepper into soups, stews, and sauces. Additionally, black pepper powder can be blended into herbal powder formulations such as golden milk, employed in extractions, or infused for topical uses.