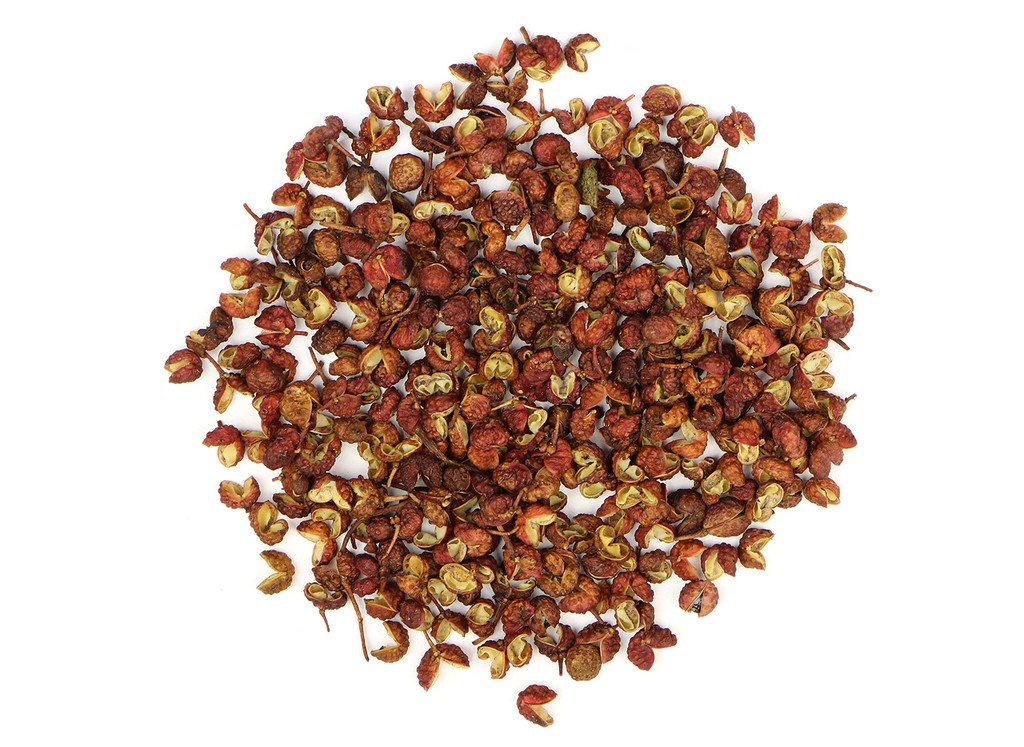 Szechuan pepper grows on an aromatic shrub in the citrus family. It is not actually a pepper at all, but instead is the outer pod of the fruit from Zanthoxylum bungeanum. Native to China, Szechuan peppercorns are now naturalized into Japan, the Himalayas, and North America and are a staple in cuisine from the Chinese province, Szechuan. They are also found in Tibetan, Bhutani, and Japanese cooking where they’re known for their tart, slightly peppery flavor, and unique mouth tingling sensation when chewed.

Szechuan pepper consists of the outer pod of the fruit of an aromatic shrub or small tree native to China, and now found throughout the temperate zones of China, Japan, the Himalayas and North America. It is not technically a pepper at all, but a member of the Rutaceae (rue or citrus) family and closely related to the prickly ash. Szechuan pepper has a similar action on the taste buds; instead of being hot or pungent like black, white, or chili peppers, it creates a unique tingling, numbing pins-and-needles sensation (the scientific name for which is paresthenia, caused by its 3% content of hydroxy-alpha-sanshool) that prepares the palate for hot spices.

Appropriately for a member of the citrus family, Szechuan pepper is characterized by its tart, lemony, acrid flavor; it is also woodsy and slightly peppery, with a complex progression of flavors that Tony Hill, in The Contemporary Encyclopedia of Herbs and Spices, describes as moving from "citrus zest to numbing shock to lingering mild sweetness." Its most typical use is of course in cooking, and it is a traditional ingredient in the well-known Chinese five-spice powder (although black pepper is sometimes substituted since Szechuan can be hard to find), as well as a hallmark of the spicy, hot dishes produced in the Chinese province for which it is named. Szechuan cuisine combines the peppers, which are lightly roasted before being powdered or infused in oil, with star anise and ginger. Szechuan pepper is also a feature of Tibetan and Bhutani cooking in the Himalayas, where few other spices can be grown, and of mildly hot Japanese noodle dishes and soups.

The plant is also referred to as Bunge’s prickly ash and Sichuan peppercorn.