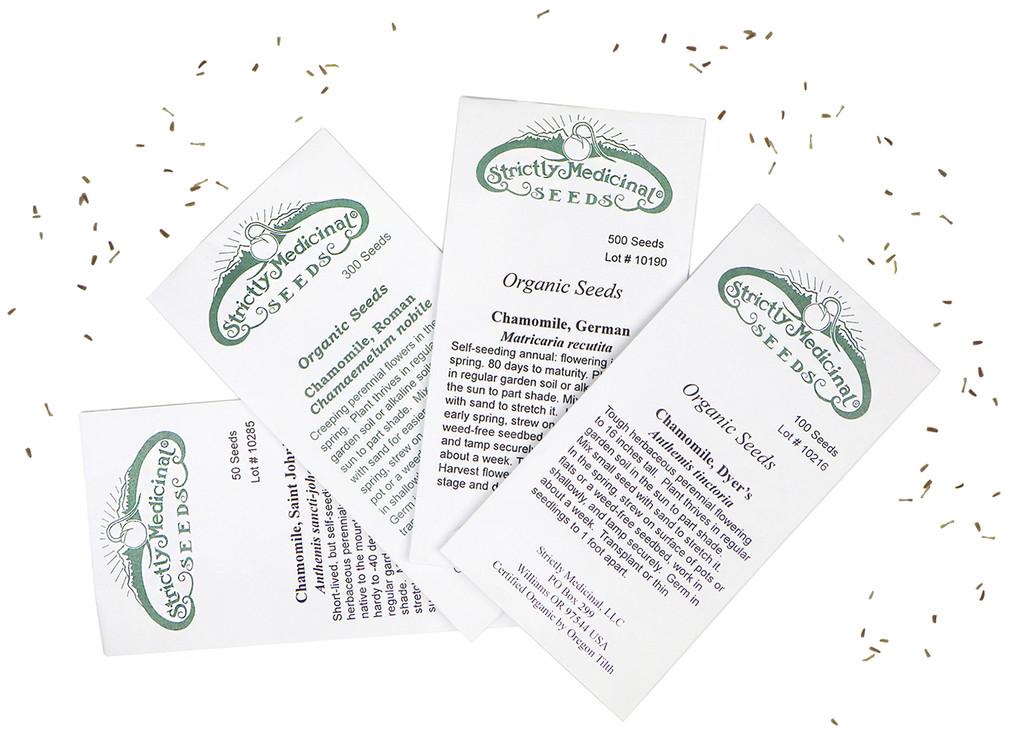 Dyer’s Chamomile Organic (Anthemis tinctoria) is a low-lying evergreen mounding perennial that will reach two feet during flowering. Native to Europe, it is hardy to all temperate zones. The large, lemon-yellow daisies are used to dye wool and are sometimes brewed into tea. Plants prefer full sun and regular garden soil. This short-lived seed is best sown directly in the fall, midwinter, or very early in the spring in a weed-free garden bed. Press into surface and keep moist until germination, which is light dependent.

German ChamomileOrganic (Matricaria recutita) is an annual or overwintering annual that is hardy to all zones. This is the delightfully aromatic chamomile of tea fame. Plant prefers full sun and regular garden soil, and cool soils for germination. Sow on surface and press in hard. Sow in early spring for flowers by early summer.

Roman Chamomile Organic (Chamaemelum nobile) is a perennial ground cover native to Europe that is cultivated worldwide and hardy to -30 degrees F. Plants grow thickly to interlock, forming a botanical mat that is perfect for an afternoon nap! Plant prefers full sun and will thrive especially well if transplants are planted into about two inches of compost on the surface. Sow seed in fall or early spring on the surface. Tamp in and keep moist. It is recommended to plant this variety into a flat, and then transplant 3 inch plants to at least 8 inches apart in the garden.

St. John’s Chamomile (Anthemis sancti-johannis) is a short-lived self-seeding evergreen perennial that grows to 18 inches tall, native to the mountains of Bulgaria and hardy to -40 degrees F. This pretty mounding plant with deeply cut, aromatic, fern-like leaves gives rise to multiple stalks crowned by the flattened, golden orange flowers. Sow seed in spring, in pots or directly in the garden. Press seed into soil surface and keep evenly moist, warm, and in the light until germination, which occurs in three days to three weeks. Thin or transplant to one foot apart.